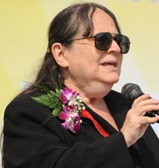 Ronda Hauben has co-authored the book “Netizens: On the History and Impact of Usenet and the Internet” with Michael Hauben. She has been a feature writer and UN resident correspondent since 2006. Ronda’s articles appeared in OhmyNews from 2004 to 2010, subsequently in her blog at Tageszeitung until 2020 and also in Telepolis and other publications. She is the recipient of the 2008 silver Elizabeth Neuffer Prize for excellence in journalism in print and online media.