What’s up with Libra? Everything That Should Concern Us About Facebook’s New Cryptocurrency

Private governance of money implying unaccountability, enclosure of reams of financial data, and the socialisation of its risk leading to a public bailout possibility.

It is a poor solution for financial exclusion, and the network power of its founding entities means it will likely be widely adopted unless explicitly stopped by governments.

This development that has been met with mixed reactions. Unlike Bitcoin, Libra will be backed by a reserve of a basket of currencies. Both the technology and the reserve are governed by the Libra Association, which includes a host of technology companies including the likes of Calibra (a subsidiary of Facebook), Uber, Lyft, eBay, MercadoPago (MercadoLibre’s payment system), and payment companies such as PayPal, Visa, Mastercard. Also part of the bandwagon are telcos, blockchain companies, venture capital funds, as well as a few nonprofits, for good measure.

There seem to be three glaring areas of concern that emerge with Libra.

The first is the governance of the currency. Libra is privately generated and governed. Preliminary debates following the announcement have focused on whether Libra is really a cryptocurrency or not, given that as of now, the ledger is permissioned, that is, only approved entities can verify transactions and govern the system. Bitcoin, on the other hand, is a permissionless system, where anyone with the required computing power can verify transactions.

Those who are enthusiastic about cryptocurrencies as decentralized money outside state control critique the centralization of control in permissioned systems. However, Facebook’s claim that “permissionless systems (that Libra is likely to be) make irreversible commitments to operating as open networks where changes can only be implemented if they are democratically supported by a majority of constituents”, presents a rather worrisome idea of what is democratic.

Even with decentralization, Libra will allow only those who have paid in to the system to have a say in how it is governed (called proof-of-stake as opposed to Bitcoin’s proof-of-work). This sort of decentralization is far from democratic: it is closer to how shareholders make decisions in publicly traded corporations.

But those affected by money are not just the ones who own large sums of it. The best way to protect all stakeholders in money, of course, is to give one vote with one value to everyone. This is how fiat currencies in democratic states already work, managed by elected officials, or bureaucrats answerable to elected officials. A private currency cannot be more democratic than this, whether it is permissioned or permissionless. Facebook itself claims to want to “explore mechanisms for protecting smaller stakeholders and service providers”; in effect admitting that small stakeholders will need protection in this “democratic” system.

The central problem with Libra is not that it is not decentralized; it is that it is not accountable to all the people that it will affect. Its values are outside the control of any central bank or sovereign government, and at scale, the currency’s fluctuations could end up detrimentally affecting the values of fiat currencies it is exchanged for. Those with stakes in Libra can decide to change the currencies it is pegged to, and can decide to print new currency with a supermajority vote.

There are plans to have grants allowing nonprofits to join Libra’s governance body, and Facebook has sought to have a “plurality of opinions and voices” in the Libra Association. But in money management, it is not the plurality of opinions that matters as much as the participation of all stakeholders. The entire process sidesteps democracy and accountability to the public at the outset. Democracy in managing currency matters not just so that regulation like anti-money laundering is adhered to, but also because changes in the value of money cause changes in real income for working people. Actual democratic control over the price of money helps temper this relationship.

Democracy in managing currency matters not just so that regulation like anti-money laundering is adhered to, but also because changes in the value of money cause changes in real income for working people.

The second area of concern is the control over financial data. Commentators and governments have raised issues related to the dangers of combining financial data with behavioral data. Facebook claims that the data will not be combined, as Libra will be handled by Calibra, which is its subsidiary. Yet, Facebook’s past record with data protection does not inspire confidence in the proposed separation.

In any event, if a large number of people use Libra, the financial data by itself will be quite valuable. The currency is meant to fuel a marketplace in goods and services. Facebook has stated that “Libra will foster an ecosystem of products and services made to help people use Libra in their everyday lives.”

The transactions data generated from this would be priceless for Libra’s founding and future members. There is no indication that this data will be open for use by anyone outside the Libra Association, although the Libra blockchain itself will be open for anyone to build products on top of.

The openness of the blockchain for value-addition is not a move made out of generosity. As more and more developers build products on the Libra blockchain, and more people use it, more data is generated with the expansion of the network. This reinforces the ownership and control of the Libra Association (at least its major stakeholders) over the payments system and data. With sufficient adoption, it gives them a detailed view of all markets through intelligence gleaned from transactions data, a view that is not available to other players in the market.

The third area of concern is the financial risk associated with an endeavor like Libra. Many have pointed out that if there is a run on a widely-adopted private currency- that is, if Libra loses public confidence and people start selling it all at once, the currency will need bailing out using public funds. This would be yet another instance of the process of socializing capitalist risk. Usually, states support this process, like by using state-owned banks to finance, and eventually bail out, private projects. In the Libra case, this process is driven by existing powerful players trying to expand their power.

Facebook has claimed that Libra will be a game-changer for financial inclusion. But the generation of currency was never a roadblock to financial inclusion; the roadblocks have always been affordability of, appropriateness regarding, and access to, financial services. Technology can certainly play a part in fixing financial exclusion, but a private currency as the proposed solution towards this is both drastic and ill-suited.

A better approach is a system like India Stack that helps numerous (private) fintech startups and existing financial companies to expand their offerings to underbanked populations. This has not required a new currency, only an improvement in authentication systems and the use of data for credit scoring. In the near future, as authentication technology is enhanced and data protection measures are improved, the use of a new, privately controlled, currency to fix the social and technological problem of inclusion will seem even more misplaced than it does now.

Similarly, making cross-border transactions cheaper and faster should be a problem for existing interbank and international organizations to fix. With a private global currency, a country’s central bank will not be able to exercise effective monetary policy if cross-border financial flows are not within its remit.

Stoller speaks about this concern in the case of the US where if a currency is private, the government may not be able to effectively impose sanctions on other countries. However, the danger might be the reverse: with monetary policy outside central bank control, and Libra having already got the go ahead from the US Federal Reserve, it is likely that countries may not be able to resist sanctions, dealing as they would be with non-state actors wielding global power.

Most of the concerns flagged here materialize only when Libra is used at scale. But given the network power and market share of the companies backing Libra, this scenario hardly seems far-fetched. There are already proposals to provide discounts for using Libra, and the technology is likely to see widespread adoption, even if it may not be appropriate for people’s financial needs.

It is, then, well within the realm of possibility that billions of users worldwide will use Libra and by default, assume its risks and pitfalls, unless regulatory action anticipates this and acts to stem this development. It is not enough to say that the currency would be regulated or illegal under current laws. When technology gains traction, laws around technology change, as has been evidenced by the number of countries that modified or clarified their laws to accommodate cryptocurrency when Bitcoin took off.

It is, then, well within the realm of possibility that billions of users worldwide will use Libra and by default, assume its risks and pitfalls, unless regulatory action anticipates this and acts to stem this development.

Justified suspicion of the state must not lead to putting the livelihoods of large numbers of people at risk due to centralized control over something as fundamental as money. Governments and the public will need to assess the potential economic gains and losses of adopting a private cryptocurrency, and then arrive at appropriate legal action. 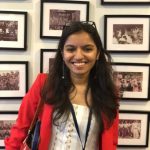 Jai researches the digital economy, particularly regulatory debates in fintech, AI, platforms and data. She is also part of the organisation’s advocacy efforts in national and international fora on digital trade. Jai graduated with a Masters in Public Policy from the Blavatnik School of Government at the University of Oxford. She was previously at the National Institute of Public Finance and Policy, where she worked on fintech, cryptocurrency and payments on a project with the Ministry of Finance. She is also a translator from Marathi to English.