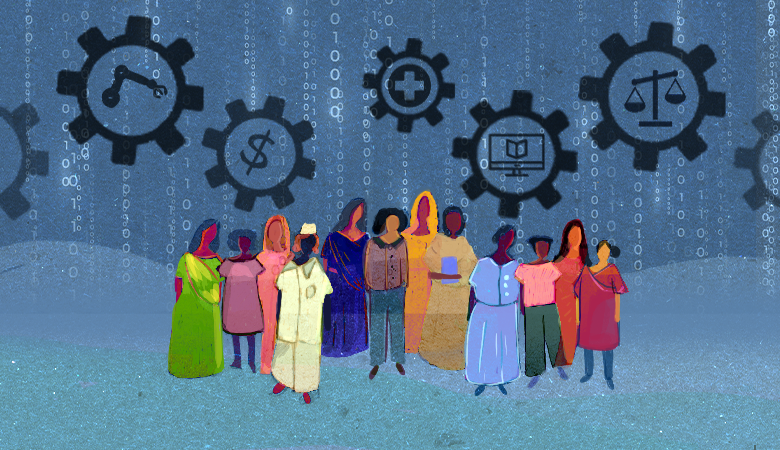 Analyzing the role of gender in addressing the inequalities created and reinforced by digital transformation.

This article emphasizes the importance of centering human beings and human relationships, and by extension, gender in debates on digital justice through the metaphor of "the canary in the mine".

It illustrates the ways in which women are disproportionately affected by digitization, offering instances from macroeconomics, labor and livelihoods, healthcare, and education.

The paradigmatic shift ushered in by big computerization and digital transformation needs to be considered from a  feminist lens to understand and address the inequalities it has created and reinforced, the article concludes.

We are republishing this 2019 piece by colleagues at DAWN as many of the issues highlighted here - labor and the question of informal and unpaid work, social reproduction and its gendered power asymmetries, and the repercussions of digitalization of sectors like education and healthcare - continue to be relevant, and indeed find urgent purchase, in a post-Covid digital society and economy. In its articulation of the need to humanize discussions on digital justice, by taking into account the gender question, this continues to be a timely contribution for the present.

Gender relations are the warp and weft of society, and they are profoundly so, because human reproduction is implicated fundamentally in those relationships. We don’t reproduce ourselves as human beings, or as a human society, except in and through gender relations. We cannot think about how, as human beings, we live, interact, survive, and reproduce, except in and through gender relations. And therefore, if we believe that there can be no considerations of justice without thinking about humans beings and human relationships, then, gender is in it from the outset.

And yet, in debates about social justice, gender has been struggling on the margins. This is at least partly because under capitalism, human reproduction—in which gender relations are key—is on the margins. Capitalist accumulation does not care about what happens with human beings, except in very limited and narrow ways. Because of this, ensuring human reproduction is always pushed to the side. It is then dealt with only in limited ways, and that too, not in the mainstream.

What happens because of this relegation of reproduction to the margins—which is at the heart of the capitalist system—is that gender, becomes conflated with tropes of vulnerability and victimhood. Women as victims, women as excluded, women as marginalized. In the context of thinking about gender, such tropes have been with us almost from the beginnings of this phase of the feminist revolution and women’s social movements, which date roughly from the 1970s, and have been with us ever since. The gut response from feminists has been to say, “no, we’re not victims, we’re agents”. But even that is simply a knee-jerk response to this trope of victimhood. And then, you have women and children, people with disabilities, and indigenous people enmeshed in tropes of victimhood, marginality, and oppression that are all connected.

The canary in the mine

In my own work, I have been trying to replace that trope of vulnerability and victimhood. This is not to say that there are no victims. Of course there are. Everybody is a victim in the system – except maybe Mark Zuckerberg! However, there also are all kinds of victims and of victimization. It’s not specific to women.

What happens to women, precisely because of their location in the context of this very fractured relationship between production and reproduction, is often a forewarning of what is going to happen overall. This is very important, particularly in this digital justice discussion.

So, I have been trying to replace the trope of victimhood with a different concept—that of the canary in the mine. What happens to women, precisely because of their location in this very fractured relationship between production and reproduction, is often a forewarning of what is going to happen overall. This is very important, particularly in this digital justice discussion, because you can already start seeing the ways in which this may be the case. The canary dies before the miners do, and the canaries are kept there exactly so that the miners won’t die. When the canary dies, get out of the mine!

So, in a sense that trope may be far more apt than the idea of victimhood—to say that women may often be the first to experience the negative impacts of the system. What does this mean for how we think about gender equality in the context of digital justice?

I am not going to make a big distinction here between the third and fourth industrial revolutions; that is, between the era of the entry of big computerization and what we are experiencing now—the transformation of the digital arena that is threatening to transform all of society and life. Part of the reason for that is one of the earliest things that happened with the third revolution of computerization was the financialization of the economy, which predated whatever we are seeing right now. This critically shapes the larger agenda, within which we are now talking about relations, justice, and how to move forward towards gender equality.

How do I see the connections between unequal gender power relations, which many from the feminist and women’s movements have been working on, and digital justice? I will just give some instances.

The first is macroeconomics. Finance, trade, and tax justice are all critically affected at this point by what has happened between the third and the fourth industrial revolutions. The domination of the real economy of goods and services production, distribution, and consumption by the financialized globalization of today with its booms, bubbles, and busts, has been made possible by the third and fourth industrial revolutions. The drive to open the world economy to free flows of finance means that national policy space has shrunk dramatically, in both high- and low-income countries. National economic policies are forced to serve the gods of the financial markets, leaving little or no room for policies and financing that support human subsistence and reproduction, including the ‘care work’ that women do, provide social protection to all, ensure jobs and decent work, assure decent levels of education and standards of health, or protect the environment and the planet. Women are among the first (the canaries) and most affected by the heartless macroeconomics of today, as has been extensively researched and documented.

When push comes to shove, the responsibility for undertaking the daily (and often unpaid) work of caring for people and ensuring their survival lands at the doors of women. Women have to feed and take care of families, children, old people, the sick and infirm, and their survival, not just biologically, but on a day-to-day basis.

The second is livelihoods, where gender relations play a critical role, because of the issue of reproduction. When push comes to shove, the responsibility for undertaking the daily (and often unpaid) work of caring for people and ensuring their survival lands at the doors of women. Women have to feed and take care of families, children, old people, the sick and infirm, and their survival, not just biologically, but on a day-to-day basis. And that immediately gets us into areas like agriculture, fisheries, and food production where the digital is transforming methods of production and consumption, generating inequality and concentration on a global scale. The case of deep-sea mining, for instance, and the so-called ‘blue economy’, which DAWN has been researching in the Pacific, provides a direct and powerful example. A very large proportion of deep-sea mining is for the minerals that go into electronics. So, there is a very direct digital connection there. At the same time, the ‘blue economy’ is being pushed by powerful corporate interests as being sustainable, even as seabed mining threatens to reproduce all the destruction of traditional fisheries that predatory trawling has done.

The third, of course, is labor, and while we keep talking and are very concerned–as we should be–about what happens in factories, there is the question of informal work and that of unpaid work. Unpaid work, the bulk of which women are responsible for, is where you get all human reproduction, and it’s also one of the reasons why women are overwhelmingly employed in informal and poorly paid work. When macroeconomic policies, driven by financialization based on digital technologies, shrink the public resources for social protection and care work, the hidden tax on women, of unpaid work, starts becoming a killer. This is what makes it difficult and often impossible for women to be employed in formal labor markets or to demand higher pay and better working conditions.

The digital invasion of primary education may make some quality improvements in schooling possible. However, it also opens the possibility of de-skilling teaching, and replacing higher skilled schoolteachers, often women, with lower-skilled, worse-paid part-timers.

Finally, the fourth is all of the sectors to do with human development, such as education and health. In these sectors, digitalization is making major inroads, with some positive and many negative impacts. The digital invasion of primary education may make some quality improvements in schooling possible. However, it also opens the possibility of de-skilling teaching, and replacing higher skilled schoolteachers, often women, with lower-skilled, worse-paid part-timers.

I believe that, in our discussions about digital justice, the issue of how we humanize it is central. It is critical that we don’t get swept away on a sea of robots, blinking lights, and shining objects. From that point of view, considering what gender means in the context of digital justice has to be part of a critical discourse and a progressive agenda from the very beginning.

This is the edited transcript of a talk given at the Workshop Equity and Social Justice in a Digital World (Bangkok, March 2019). The article was first published on ALAI's website and magazine and can also be found on the DAWN website. Gita Sen is a founding member and currently the General Co-coordinator of DAWN. 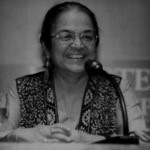 Gita Sen is a founding member and currently the General Co-coordinator of DAWN (Development Alternatives with Women for a New Era), a feminist network based in the global South.