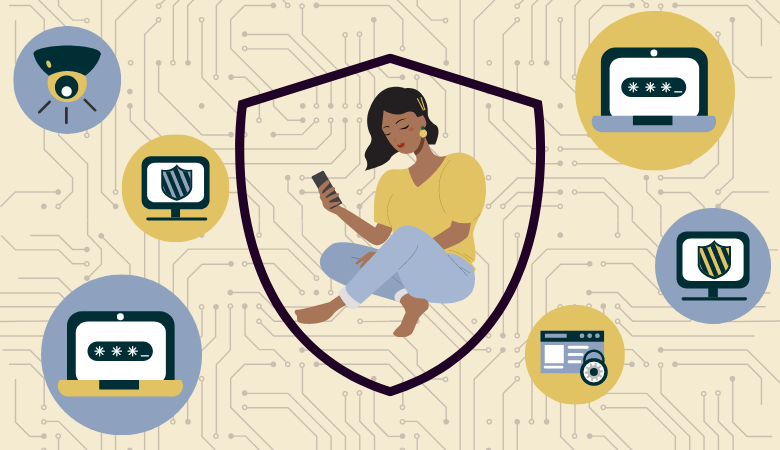 Cyber Safe Girl: How Not to Write a Cyber Safety e-Book

While a  cyber safety booklet can be a helpful resource for survivors of cybercrimes, it is essential for such resources to have an empowerment-based approach to make online spaces not only safe but also accessible for all.

With the increasing presence of women and girls in online spaces, the rates of online gender-based violence have also risen. One of the responses to this crisis had been an easily-digestible cyber safety e-booklet.

While such a booklet could have been a useful resource for survivors, this booklet, authored by a cis-man, gets several things wrong. Right from its infantalizing title, to equating safety with caution and disregarding the intersectional nature of cybercrimes.

This article delves into the problematic nature of this e-booklet to reveal the larger issues in the state's approach to online gender-based violence and suggests an alternative model for cyber safety that would empower women to safely access online spaces.

Picture this: Tanvi, a “selfie-addict” with a good phone camera clicks many candid pictures with her boyfriend and friends. She accidentally drops her phone and visits an unauthorized mobile service shop to get it repaired. The shopkeeper gains access to her photographs despite the application being locked by a pattern code. Tanvi’s relative later informs her that her photos are being shared online. She “regrets for clicking [sic] such photos and keeping them in her phone [sic]. She is unable to face her family and society now. You be careful.”

The above scenario is one of many visualized in a cyber safety e-booklet titled Cyber Safe Girl – Beti Bachao, Cyber Crime Se 3.0. Written by cyber security expert and professor at the Sahyadri College of Engineering and Management, Ananth Prabhu G, the book credits numerous IPS (Indian Police Service) and KSPS (Karnataka State Police Service) officers for their inputs. By its own description, the book presents “30 eye-opening infotoons to ensure online safety of girls”, exploring scenarios ranging from “Debit Card Cloning” to “Drone Surveillance” to the “Mobile Repair Shop” fiasco outlined above. Cyber Safe Girl uses nine panels of pictures to boil down complex issues into simple (and perhaps simplistic) narratives. Every scenario is preceded by a page describing the cybercrime in question and the list of sections from the Indian Penal Code and the Information Technology Act, 2000 that pertain to the crime.

Cyber safety manuals like these may be responding to the rise in cybercrimes against women in India over the last few years, coinciding with the increasing presence of women and girls in online spaces. Between 2018 and 2019, there was a 63.5 percent increase in the number of registered cybercrime cases in India, with the state of Karnataka topping the list. According to the latest   data from National Crime Records Bureau, at 2,698 reported cases, Karnataka also registered the highest number of cybercrimes against women in 2019. Paradoxically, the state has the dubious reputation of zero convictions for cybercrimes in the past. The situation worsened during the nationwide lockdown imposed in the aftermath of the Covid-19 pandemic, with a further escalation in crimes against women, cyber and otherwise, across the country.

In this context, an easily-digestible guide to understanding cyber safety may have been a welcome addition. However, from the title to the 30 scenarios included, this particular booklet gets quite a few things wrong. For instance, the subtitle of the e-book, “Beti Bachao, Cyber Crime Se”, which translates into “Save the Daughter, From Cyber Crime” uses the reductive albeit common patriarchal trope of framing women’s safety in terms of their relationships within the family, their identities constructed and understood in relation to the people around them. Furthermore, its messaging seems to be directed as much at family members — parents or guardians — who are purportedly responsible for the protection of their daughters, as women themselves. This is particularly notable given that the book credits a group of predominantly male police officers, thus foregrounding a male perspective on women’s safety while largely ignoring women’s voices and their lived experiences. In addition, the title of the book patronizingly uses the term ‘girl’ despite featuring sketches that include women of all ages. In fact, it does not address cyber safety issues experienced by children at all.

In sketches such as “Call Spoofing” and “Cyber Vultures”, the book uses clichéd sexist and ageist stereotypes. Older or widowed women are portrayed as more susceptible to cybercrime, even though multiple studies have overturned such assumptions. But it is not so much the individual scenarios themselves, but the way that the book presents and positions these scenarios that is particularly problematic. Many of the incidents mentioned in the book are not specific to women, and yet, the book seems to suggest that women need to take additional precautions to make themselves safe when accessing online spaces. This is not to say that women do not experience cybercrimes or a disproportionately more hostile online space on account of their gender and other intersecting social identities. However, some of the solutions offered by the book — such as installing and updating anti-virus software, creating strong passwords, and being wary of phishing emails and messages — are practices that all internet users need to be aware of, regardless of their gender identity.

Despite the internet’s open and pronounced hostility towards trans, gender non-binary, queer, Dalit-Bahujan, and religious minority communities, the book is silent about the online violence faced by people who identify with or belong to one or more of these identity categories.

The overlapping identities of gender, sexuality, caste, class, religion, and age that people in-habit have a significant bearing on their online experience, but the safety manual does not even attempt to account for this. This erasure speaks volumes about who gets included and who is perceived to be worthy of protection. If the book’s creators are to be believed, it is only the infantalized cis-gendered woman of a certain class, caste, and religion who is at risk and deserving of protection. Despite the internet’s open and pronounced hostility towards trans, gender non-binary, queer, Dalit-Bahujan, and religious minority communities, the book is silent about the online violence faced by people who identify with or belong to one or more of these identity categories. The singular preoccupation with women’s safety also rehashes the binary narrative of men as perpetrators and women as victims, and ignores the experiences of male victims/survivors of online sexual violence, making it even more difficult for them to report online abuse.

The book presents steps and measures that women can take in order to avoid being in situations that lead to gender-based violence, harassment, trolling etc. The sketches warn women of the dangers of cyberspace, making the predominant tone of the book not one of empowerment but of fear and danger. It equates safety with caution — women will be safe if they do not put themselves in unsafe situations — and places the onus of safety, through self-policing, on women themselves. By calling people to action with its subtitle of ‘save the daughter’, the safety manual enlists families into this act of policing, thus adapting the patriarchal control and surveillance of women’s bodies in offline spaces for the digital age. 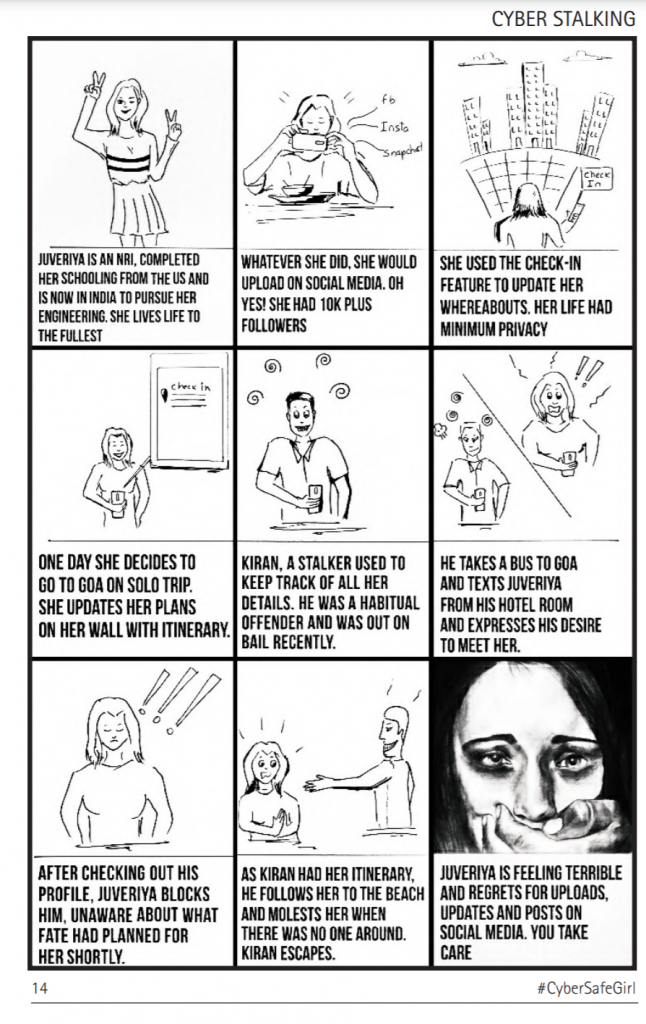 Nearly all the ‘infotoons’ in the book end with the injunction to women to “take care” and “be careful” or show the victim/survivor regretting her actions (see the illustration above as an example). Such conclusions are closely allied and intertwined with the age-old practice of shaming and blaming women. In the infotoons, women also experience these feelings of regret in isolation, without any social or psychological support. In fact, family and society are often used as vehicles to shame victims/survivors as was illustrated in the ‘Mobile Repair Shop’ scenario. These overwhelming and isolating emotions of regret, shame, and guilt are clearly meant to discipline women into internalizing vigilance and adopting behaviors that are based on avoidance and self-regulation. Of course, the book does not explicitly call for women to be subjected to familial or state surveillance, nor does it advocate for denying internet access to women. While this would position the safety manual as relatively progressive, the disciplining strategies espoused in the book are far more insidious as they attempt to place the blame squarely on women for inhabiting online spaces and using digital technologies. As such, the book reinforces the biases held by police officers, who have often resorted to victim blaming when handling cases of gender-based violence. This is especially concerning since the author Ananth Prabhu G has conducted workshops, webinars, and training sessions organized by colleges and government institutions such as the National Commission for Women and the police.

Furthermore, the book’s narrative of fear and danger can significantly discourage women from using the internet, especially those who are new users of information and communication technologies (ICTs). In a country like India, where girls and women often find their access to digital spaces already restricted, the narrative of fear would spread faster than the access to technology. Some villages in the states of Uttar Pradesh and Gujarat and a college in the state of Maharashtra, to cite a few examples, had banned the use of mobile phones for girls and unmarried women as it was seen as a ‘distraction’ and a gateway to ‘immorality’. The scenarios in this book would only reinforce such patriarchal anxieties regarding women’s access to digital space.

Instead of denying women the freedom to experience online spaces and its resultant benefits, a just and equitable response would mean realigning public discourse towards ethical and safe technology and socio-legal reforms.

The book’s focus on modifying women’s behavior instead of exploring the deep rooted, structural issues plaguing irresponsible tech is akin to missing the wood for the trees. The emphasis on ‘avoidance’ ignores the fact that social engagement through online spaces is no longer a privilege but is fast becoming a necessity. Cyberspace is often a site for meaningful self-expression and identity construction, empowering people, particularly those from marginalized communities. By being active on social media and maintaining a strong online presence, women have gained an avenue for pleasure, self-assertion, and even income. In their book on public safety, Why Loiter?, Shilpa Phadke, Sameera Khan, and Shilpa Ranade argue that the discourse around women’s safety places a disproportionate emphasis on danger and risk. They foreground, instead, the importance of the right to risk, fun, and pleasure through the subversive act of ‘loitering’. Extrapolating their argument to online spaces, the ability to take risks and actively seek joy and pleasure is essential to not merely gain access to cyberspace, but to thrive in it. Instead of denying women the freedom to experience online spaces and its resultant benefits, a just and equitable response would mean realigning public discourse towards ethical and safe technology and socio-legal reforms. Doing so would result in an inclusive digital citizenship that foregrounds the emancipatory aspects of the internet. 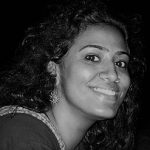 Vaishno works as a project associate at IT for Change. Her work focuses on the programmatic aspects of the online magazine Bot Populi’s feminist track. She also contributes to the research and advocacy of national and international projects undertaken by the organization.
Outside of work, she loves reading and writing fiction. Her other areas of interests include dance, music, languages, and mythology.